The land for Streatham Cemetery was originally located within the old boundary of Streatham parish and in the manor of Tooting Bec - now part of Upper Tooting parish. The western perimeter of cemetery followed the old parish boundary between Streatham and Wandsworth parishes and now marks a division between Tooting and Earlsfield/Wandsworth Common wards of Wandsworth Council (see https://maps.wandsworth.gov.uk).

When it opened in 1893 the cemetery consisted of 23 acres -‘abutting on the North and North East sides thereof upon land belonging to the Middlesex County Asylum and on the South East upon land known as the Springfield Nursery and on the South side thereof upon Garratt Lane’ (from a conveyance in Wandsworth local history collection). The land was purchased by the Burial Board for the Parish of Streatham, which had been incorporated under the Metropolitan Burial Act of 1852, in response to the second cholera epidemic of 1848-49. The land was then countryside owned by George Taylor and Henry William Martin, who were selling off an inheritance from Henry William Martin senior. His widow, Sarah Ann Martin approved the sale and suggested the purchase price of £17,684 5s 0d.

The Cemetery opened in 1893 and on 11th September 1893 the Streatham Burial Board approved a scale of fees for graves which was to be advertised on the vestry door. The first person to be buried there was Mark Apsey of Hereward Road, Upper Tooting. Mark was just eight years old and his interment took place on October 2nd 1893. Two days later, another resident of Hereward Road Upper Tooting, Mary Ann Fowler, was also buried in the cemetery.

After the First World War the pressure on space for burials increased and land for an extension to Streatham Cemetery was purchased. The date of this purchase is unknown, but Wandsworth cemetery committee minutes of 07/05/1929 note that a small extra piece of land was purchased from Bell estates for £50, to allow for an additional entrance in Broadwater Road. The layout of the cemetery extension took place between 1931-32. On 25/6/31 the Bishop of Kingston visited to consecrate the extension land and Wandsworth Cemetries Committee noted that turfing works on the extension were completed by 16/06/32. By 1933 burials were taking place in the extension. 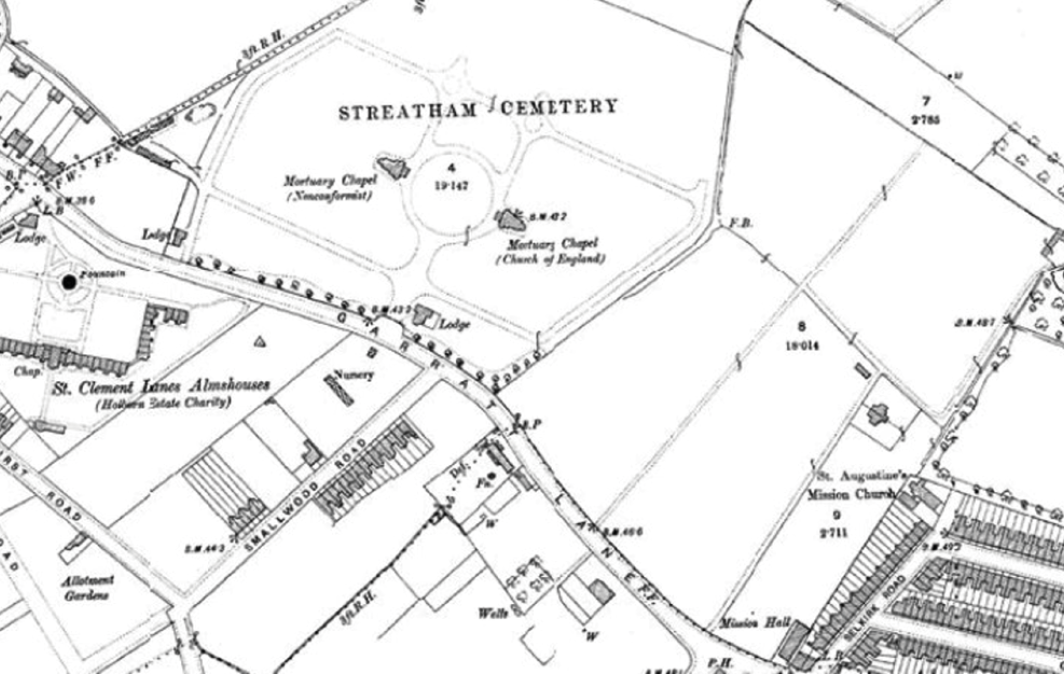 Map of 1894 showing the new Streatham Cemetery and the lodges on Garratt Lane. The section of Selkirk Road (seen bottom right) was later renamed Khama Road to honour King Khama III’s links with the Mission Hall. See https://londonstreetguide.com/khama-road-sw17/
When Streatham Cemetery opened in 1893 there were two lodges, each at a set of gates opening onto Garratt Lane and two mirror image chapels. The buildings were designed by William Newton-Dunn and constructed in gothic ragstone. The chapels each have side rooms or vestrys off the entrance halls and arcaded porches set at right angles to the entrances. This feature is known in architectural jargon as a ‘jericho’ or ‘portes cochere’.

The main entrance has the words Streatham Cemetery inscribed across the portico stonework.

After the First World War a memorial with sacrificial cross and screen wall was placed in the cemetery. The memorial was originally dedicated to WW1 casualties with names inscribed on the screen wall. Names of the fallen from World War 2 were later added to the lower facing walls.

There is a second memorial alongside the western perimeter wall dedicated to Wandsworth residents killed by enemy action.

As well as numerous crosses and angels in a variety of styles, interesting grave monuments include a magnificent obelisk facing the main entrance. (See ‘Notable graves’ below.) Nearby is the figure of a grieving woman in blue dated 1959 and the elaborate Harmer family monument with violin. Also in that section, John Krall’s grave dated 1903 consists of dramatic black granite blocks and in front, a slate inscribed with a musical score, indicating a musician. In front of the chapel on the left of the main entrance Henry Budden’s grave can be found with a beautiful blue glazed ceramic dome dated 1907.

More recently, benches have been placed at strategic places in the cemetery, so that visitors can sit and enjoy views of the tranquil natural surroundings. 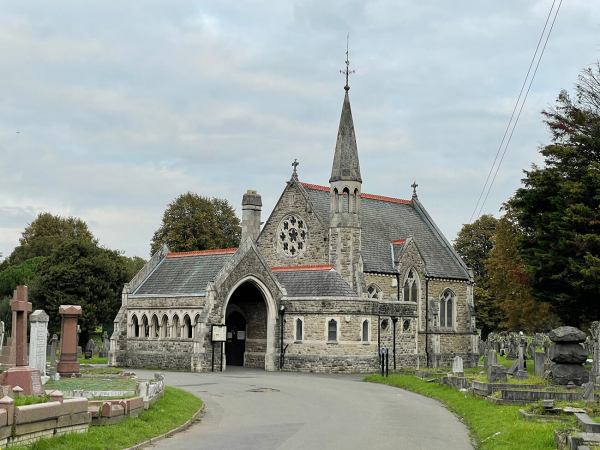 Many Commonwealth War Graves are found in the cemetery 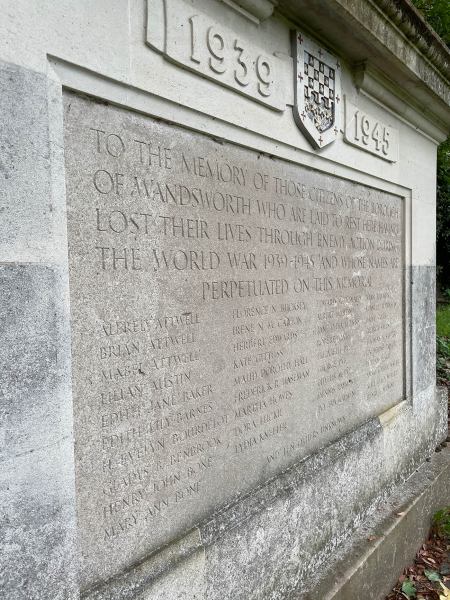 Memorial to Wandsworth residents killed by enemy action in WW2. 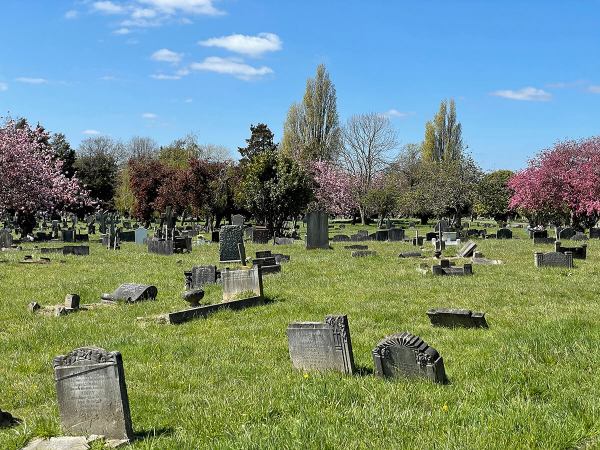 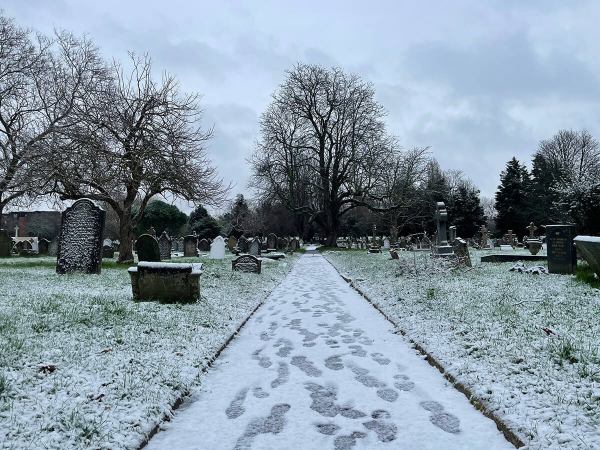 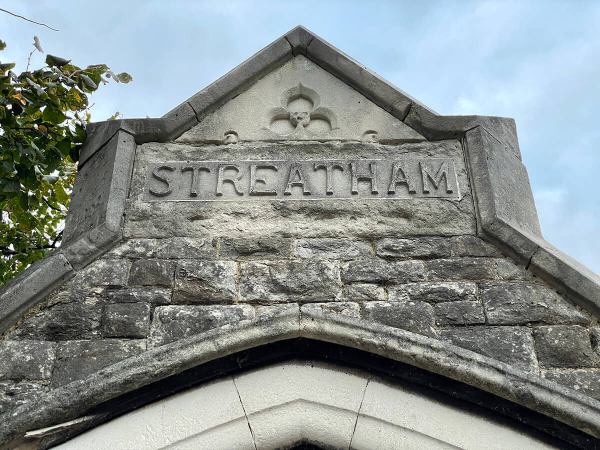 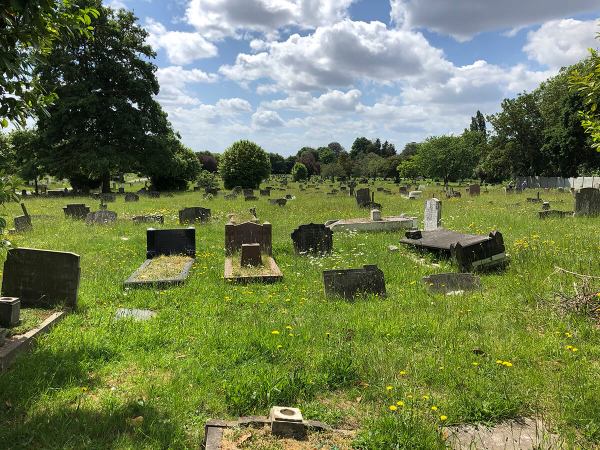 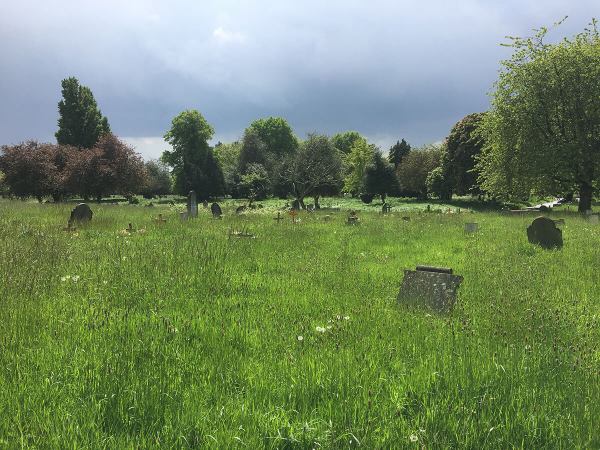 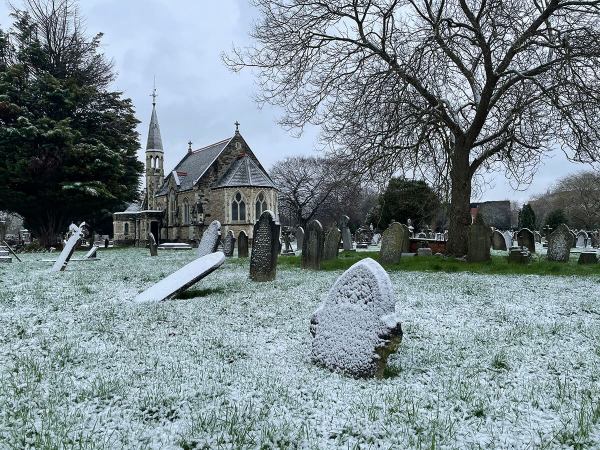 In 2019 the Friends installed an information board celebrating a few of these, positioned to the east of the War Memorial (and shown below).

In years to come we would like to honour more people and ensure that Janet Rose Waring Roberts has her grave marked once again. 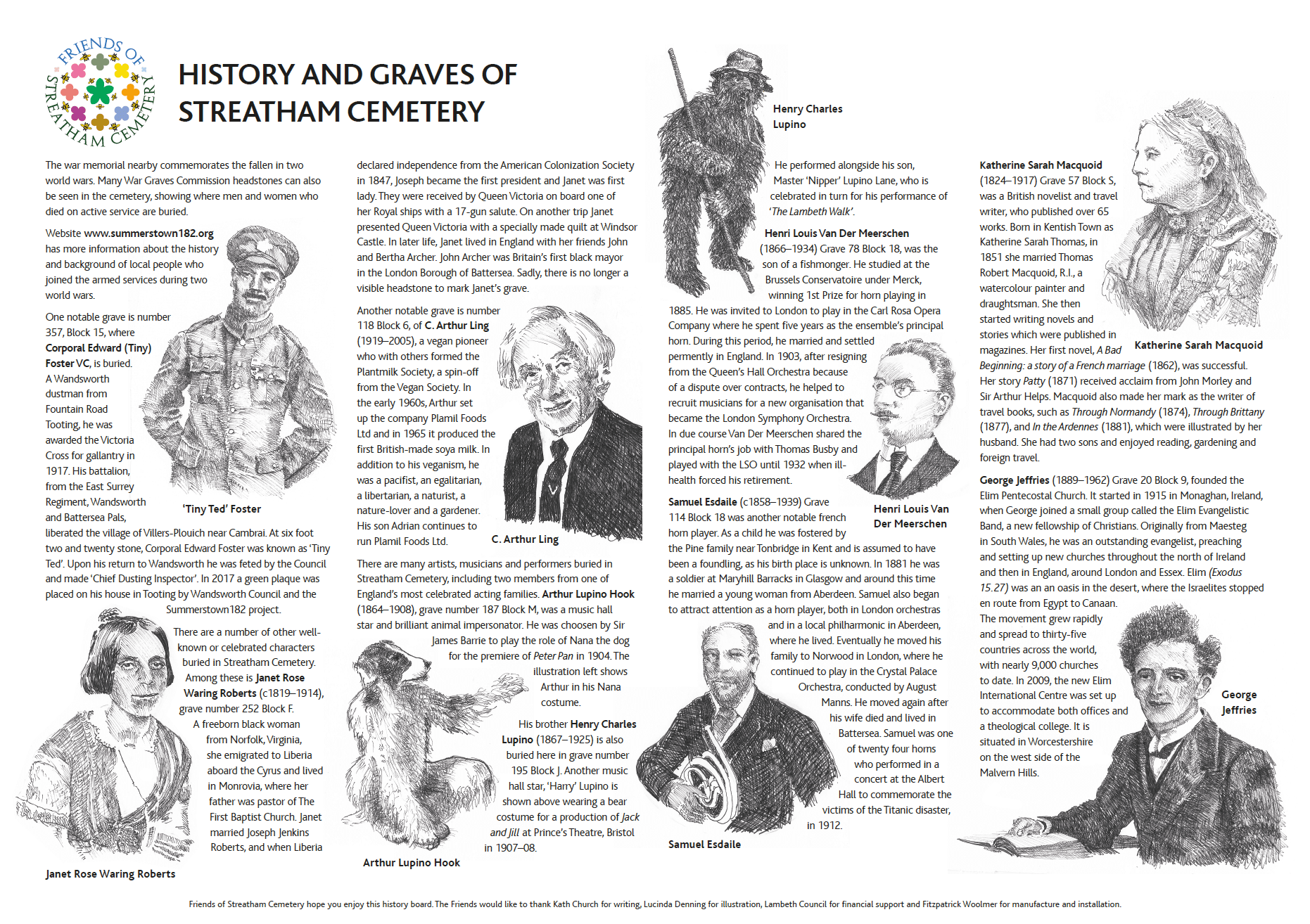 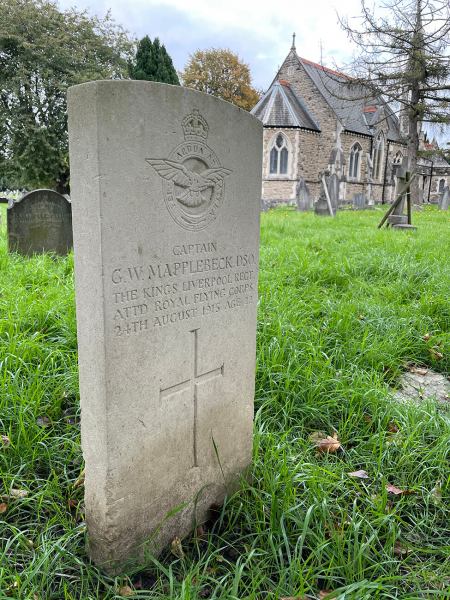 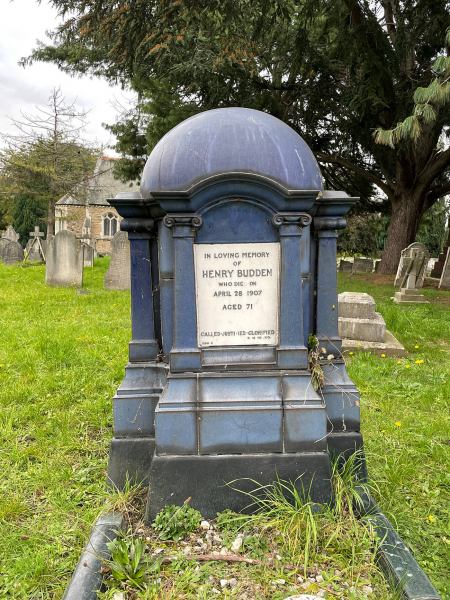 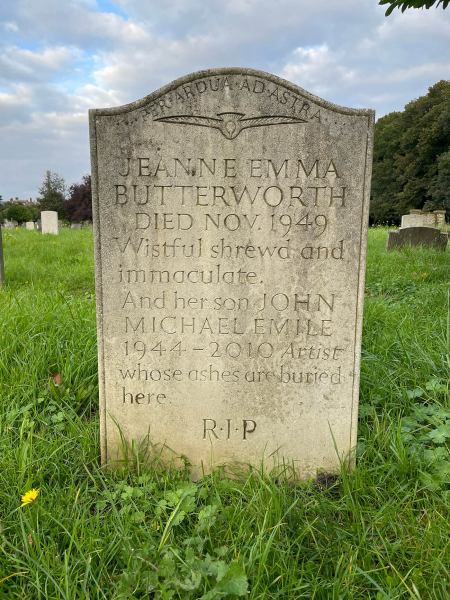 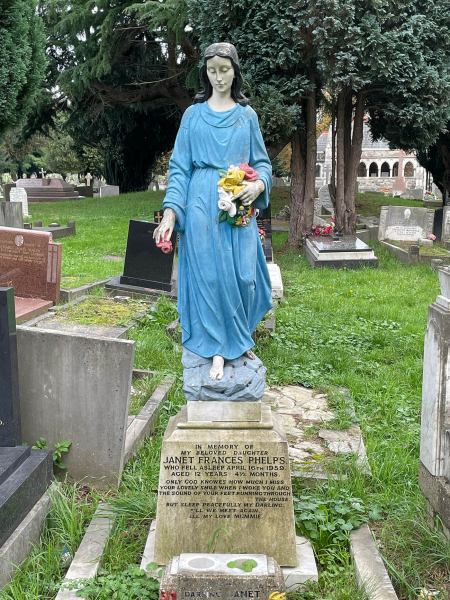 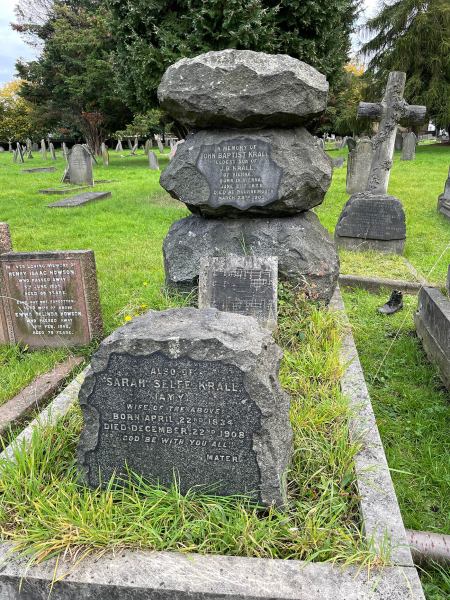 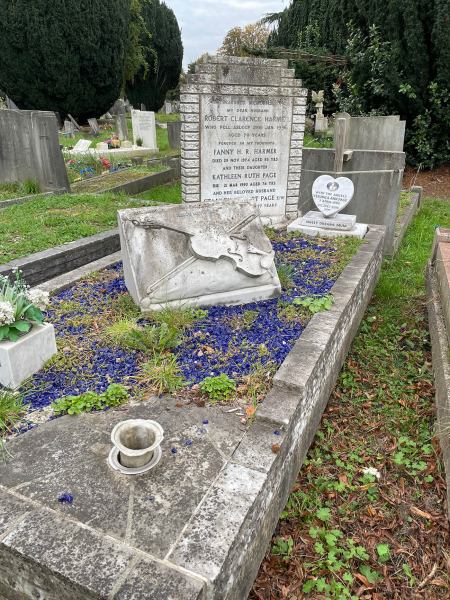 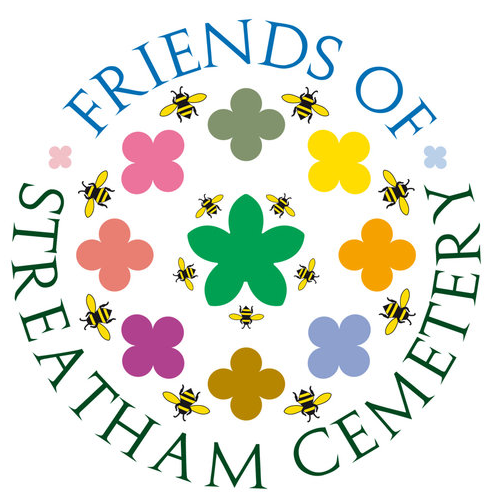